Foreigners visiting Ukraine around the winter holidays are likely to be stumped by the phrase “Old New Year.” The holiday is still celebrated on January 14, in memory of the switch Ukraine made in 1918 to the Gregorian calendar, when 14 astronomically redundant days were annulated. However, parts of the Orthodox Church never made the switch, and still live by the older Julian calendar. As a result, 6.6% of the world’s Christians (and 56% of the Orthodox Christians) celebrate Christmas on January 7, 14 days after the rest of the world does on December 25. 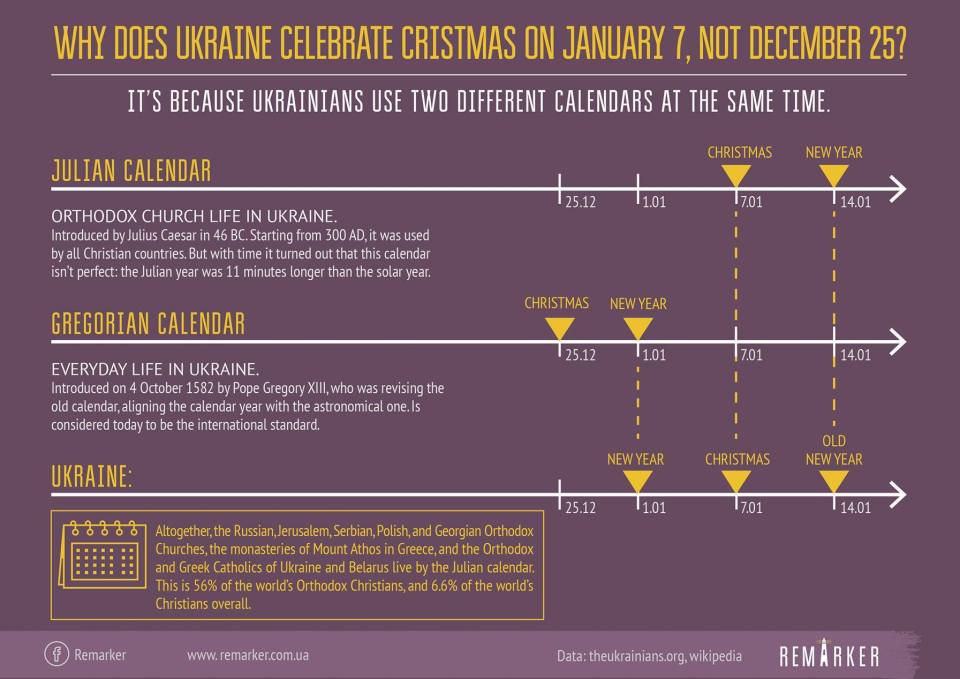 The Julian and Gregorian calendars

The Julian calendar was introduced in 46 BC by Julius Caesar, hence its name. At that time, the calendar was the most progressive and accurate at that time. All Christian countries were using it starting from the IV century AD. But with time it turned out that this calendar wasn’t perfect: the Julian year was 11 minutes longer than the astronomical one. Those “extra” 11 minutes amounted to one extra day each 128 years. And after 1,500 years, the calendar lagged a whole 10 days, which was the reason of the introduction of the renewed Gregorian calendar in the XVI century.

The Gregorian calendar was introduced on 4 October 1582 by Pope Gregory XIII. This calendar is still recognized by the world as the international standard. It takes into account the inaccuracy of the Julian calendar: the average duration of the year constitutes 365 days, 5 hours, 49 minutes, and 12 seconds.

Italy, France, Spain, Portugal, and Lithuanian-Polish Commonwealth were the first to adopt the calendar. According to the Pope’s innovation, 15 October came right after 4 October in 1582 in order to correct the Julian calendar’s error.

The Patriarch of Constantinople, under whose jurisdiction most Ukrainian lands were at that time, at first agreed to make the transition to the new calendar and even sent the Pope a letter of confirmation that starting from 1584 the Churches of his jurisdiction will start using the new calendar. The Orthodox communities of “Moldova, Lyachia, Rus, Georgia and many other lands” were part of this jurisdiction. But with time, another viewpoint started dominating in the Patriarch’s circle and the proclaimed transition never happened.

Roughly half of Orthodox world lives by Julian calendar

Some Orthodox communities choose to celebrate Christmas on January 7, like the Latvian Orthodox Church of the Moscow Patriarchate, which starting from the 1920s holds Chrismas celebrations on December 24-25.

Orthodox countries are introducing an additional state holiday, on 25 December as well as 7 January

Moldova, Belarus, Albania have two state holidays – on December 25, as well as January 7. This allows citizens to choose when to celebrate one of the largest Church holidays. As a rule, society first celebrates both dates and then the new tradition replaces the old one. The conservative part of society maintains, however, that this would mean eliminating the old, “real” Ukrainian (and church) traditions that are unique to Ukraine and eastern Christianity. At the same time, adepts of change stress that it makes sense for all Christians to celebrate Christmas at the same date and that it makes no sense to hold on to an astronomically outdated calendar.

Ukraine could continue living by two calendars at the same time. But sooner or later, moving the date of celebration of Christmas would be inevitable – if the Church continues living by the Julian calendar, the “extra” minutes will lead to an “extra” day starting from 2100, and Christmas would have to be celebrated on January 8, not January 7. However, it’s possible to ignore the “extra” days, as they were ignored the last few times, but that would mean essentially that the Julian calendar just becomes the Gregorian + 14 days, negating its astronomical essence.

This year, a draft law on designating December 25 a state holiday alongside January 7 was submitted to the Ukrainian parliament. Having two state holidays would allow parishes to choose themselves what date to celebrate Christmas on. A similar practice exists in Greek Catholic parishes outside Ukraine – today, there are parishes that still celebrate the date on January 7, while most stick to December 25.

Want to talk more about article “Why does Ukraine celebrate Christmas on January 7, not December 25?”?

The rating of the most sold cars in Ukraine

In November Ukraine And the World Commemorate Victims of the Holodomor

Construction Of The Shelter Over Chornobyl (Video)