An American Professor explains why Ukraine lacks economic freedom, how the marked presence of the state in the economy influences the rate of economic growth, and why Ukraine remains a poor country.

“What do you associate with Ukraine?”

James Gwartney, the Gus A. Stavros Chairman of Economics at Florida State University, has thought about this question and answered it.

“Surely, I associate Ukraine with the ‘breadbasket of Europe.’ This is a country with fertile soil and people with a strong entrepreneurial spirit. I see this is so, because Ukrainians have been successful in all countries, except, of course, within Ukraine.”

Gwartney journeyed to Ukraine at the request of the Bendukidze Free Market Center for a presentation of his findings. The expert analyzes the transformation of economic and political institutions in twenty-five former centralized and planned economies.

As the co-author of the Fraser Institute’s Global Index of Economic Freedom, he is an expert on the development of economies of hundreds of states over the previous thirty years.

The professor explained to Ukrayinska Pravda in what ways Ukraine lacks economic freedom, how the presence of the state in the economy influences the rate of GDP growth, and why Ukraine remains a poor country.

UP: Is this your first visit to Ukraine?

No, I was here twenty-five years ago, in 1992. Back then there was a bus route to Moscow through Hungary, Romania, and Ukraine. I returned to Europe through Poland. I thoroughly enjoyed the trip. Today, twenty-five years after the collapse of the Soviet Union, I study countries which had centralized or planned economies. I research what stimulates their development and the changes of their political institutions.

UP: You are known as the co-author of the Fraser Institute’s Economic Freedom Index. Can you clarify, what is economic freedom? What are its fundamental criteria?

I have participated in the compilation of the Economic Freedom Index since the end of the 1980s. If in the 1980s the index included 100 countries, today it covers 159.

The Economic Freedom Index measures, as a basis, five major groups of indicators: the size of the government, the justice system and the protection of property rights, access to finance, the quality of regulations and freedom of international commerce. As we desire the index to be objective, we use only official data published by the World Bank, the International Monetary Fund, and PricewaterhouseCoopers. We do not add our own assumptions or judgments.

Within the listed groups of indicators are 42 measures, on the basis of which we built the index. For an example, when we look at the group which pertains to freedom of international commerce, we evaluate tariff barriers, currency restrictions, quotas, restrictions the government imposes on domestic and foreign investors. In the “Size of Government” group we look at the level of government spending relative to GDP, the correlation between state and private investment, the tax burden.

UP: Ukraine ranks 149th in the index, between Angola and Iran, and of 25 countries with planned and centralized economies, we are in last place. What signs are most characteristic for Ukraine’s economy, and the lack of freedom in it?

Ukraine has a weak justice system, which does not uphold the requirement of adhering to contracts nor does it protect property rights. The central characteristics of your economy are the high level of inflation, economic instability, control over capital markets, restrictions on currency exchange, and the high level of regulations.

UP: Over the previous years the government has passed laws on deregulation, which theoretically may better Ukraine’s position in future ratings. On the other hand, we have significant obstacles to foreign trade – sanctions against Russia. Is economic freedom compatible with commercial sanctions?

The majority of restrictions, of which I spoke, do not have any connection to the sanctions against Russia. I referred to the complexity of starting businesses, to regulatory difficulties which influence trade relations with other states. In our research Ukraine has, notably, been in the in last place among countries with centralized or planned economies for the last ten years. This is not the case with Russia.

UP: Can one speak about international trade as a component of economic freedom under the effects of sanctions on one’s chief trading partner?

Certainly, some restrictions negatively influence economic freedom. They have negative consequences on economic growth and the well-being of citizens. But regarding sanctions against Russia – these are not the cause of the problem of the low level of economic freedom. If we speak about Ukraine’s GDP, then its growth has been the slowest among all states with centralized and planned economies over the last 25 years. 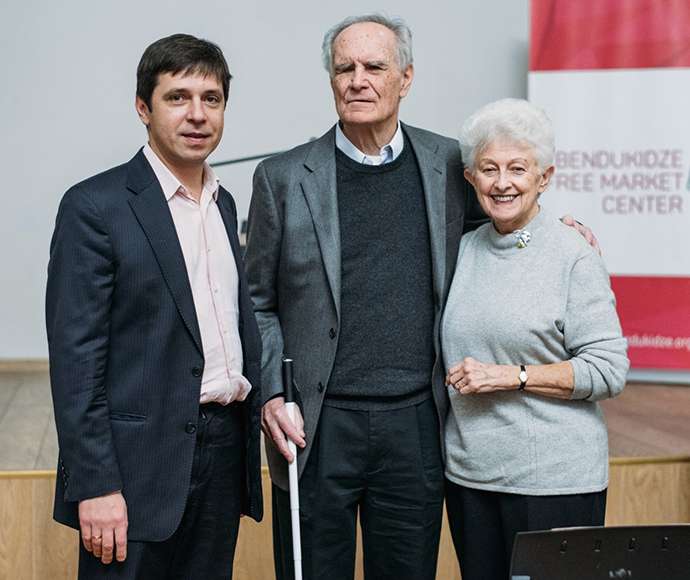 UP: The level of state expenditure is calculated when evaluating the indicators of economic freedom. In 2018, as in 2017, Ukraine’s state budget expenditure is planned at 29.6% of GDP. Is this high?

UP: What does it need to be brought down to? What is an acceptable level, equal with other countries?

UP: In one article you jointly wrote with the economists Robert Lowson and Randall Holcombe, you argued that for every 10%-of-GDP increase in the size of state expenses, the growth of GDP contracts by 1%.

When we speak about the presence of the state in the economy, we do not receive a guarantee that the resources will be directed towards productive economic activities, towards activities which help create wealth for the state and its citizens. For the private sector, this is nonsense: if a business is not productive it will simply go bankrupt.

UP: You speak about the necessity of restricting the role of the state in the economy. In which spheres can the state’s presence be allowed?

The state should play the role of a referee, which protects property rights, which enforces contracts between business entities and different forms of property. The state should provide a strong justice system, security, and protect the environment. Nothing more.

UP: And what about education and healthcare?

In these spheres the state should give aid to the most vulnerable category of citizens through private providers: for example, it should compensate private hospitals for the services they provide. The state has one more function: to give citizens a choice whether to receive education and medical service from state institutions or from private ones. If the person chooses a private institution, the state should give a subsidy for this service.

UP: Let’s talk about political motivations for the expansion of state spending. For example, could elections bring a sharp increase in social spending for non-economic motives?

If economics do not allow a realization of an increase in social spending, then the tax burden will grow. Another consequence is a reduction of the motivation of the population to work, because people will receive income from the state regardless of how actively they work. The third consequence relates to state support.

In this third category, I am not talking about social expenses, but about favoritism of specific businesses, about subsidies for businesses which neither reduce the level of poverty nor better the citizenry’s well-being. It is very harmful to economic growth, and of no interest to the population, to support these failed businesses with state grants.

UP: How does the raising social spending for non-economic motives influence the level of poverty?

We cannot speak of the improvement of the way of life of citizens without an increase in productivity. The extent of productivity and citizens’ incomes are two sides of the same coin.

We analyzed the level of poverty in countries with centralized or planned economies and we saw that the more liberalized the economy, the lower the poverty. We speak of the early reformers –the Baltic countries, and of the later ones – Romania and Bulgaria. Economic freedom lifts the productivity of work and increases citizens’ incomes. 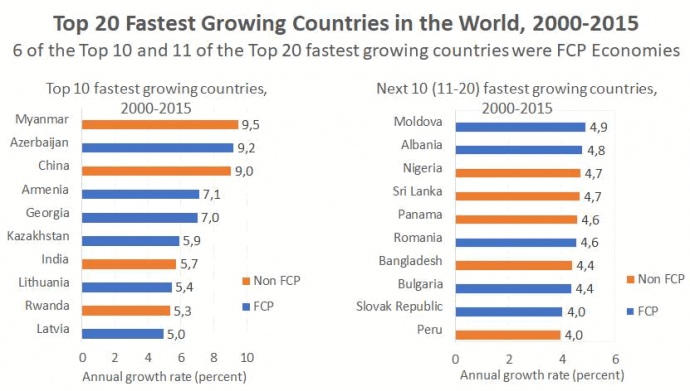 UP: Wages in Ukraine are low, and it is necessary to raise them. According to data from the UN, 60% of Ukrainians live at the poverty level.

Ukrainians are poor because of a lack of economic freedom. No economic reasons exist for raising social standards. The low productivity of several giant businesses which receive state support prevents social standards from rising.

You spend huge resources on the maintenance of state-owned businesses, which help specific economic sectors but in turn produce nothing which improves the well-being of the population. Thus, you create favorable conditions for corruption.

In such conditions, those who want to create products which the population truly needs have difficulty starting their businesses and remaining competitive. You have unequal conditions: you waste good money on businesses which have no value.

UP: This means that the state should generally not support anybody or anything?

The state must desist from subsidizing any and all aspects of business, and it must remove regulatory barriers for starting and operating businesses. I am speaking particularly about the requirement for entrepreneurs to apply to politicians to obtain different types of licenses and state support.

Instead, it is worth it to give this power to the consumer. Let the consumer decide which business has a right to existence and which does not. Politics are not required to identify consumer needs. The only requirement for this is competitive conditions in which businesses can operate.

Competitive conditions confirm the development of a country from its former centralized-planned economy. Georgia, Estonia, Lithuania, Latvia, Romania, and even Albania all have higher rates of economic growth than Ukraine has.

UP: Ukraine has a significant obstacle – a moratorium on the sale of agricultural land. Consumers do not perceive the necessity of abolishing this moratorium. Ukrainians fear that this will raise the cost of land, they fear it will diminish their share. Political populists only reinforce these fears. What can be done in this situation?

I have trouble understanding why a landowner would be against the right to dispose of his or her own land. If he or she does not wish to sell the land, it can remain under his or her own possession. If a desired price is not met, nobody is required to sell. We’re speaking only about the existence of a right. It seems to me, that to be against the abolition of this moratorium is a problem of “economic literacy” of the population.

UP: At the beginning of this conversation you said what happened in Ukraine twenty-five years ago. What changes occurred during this period in our country most surprised you?

The tragedy of the situation is how little has changed in the time which has passed. Twenty-five years ago you had the Communist Party, which was responsible to appointed cadres. Today you simply elect people who continue to govern the country by hand and make decisions for you.

In the case of Ukraine – a country with huge economic potential, land resources and human capital – I was surprised by the absence of sufficient changes in the direction towards economic freedom during this time.

Want to talk more about article “James Gwartney: Ukrainians are successful everywhere except their homeland”?

Phenomenon of bitcoin: What benefit could Ukraine get from digital hryvnia?

Hubmee – new “family friendly” app gets in the Collision’s

Why (in some years) Easter Is Celebrated on Different Dates

Pidhirtsi Castle – the view from above